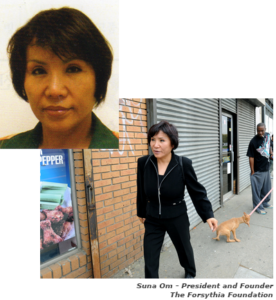 The Forsythia Foundation is a charitable, non-profit Single Parent agency established in June of 2010 by Suna Om, President and founder.

Ms. Om, a native of Korea, is a respected resident and investor in the historic West End community of Atlanta, Georgia. Years ago she became a successful entrepreneur and real estate developer, as well as serving as the head of the Korean American Chamber of Commerce of Georgia. Suna is also a member of the West End Merchants Association, and regularly participates in events and initiatives designed to improve the economic opportunities and growth of the West End neighborhood.

A few years ago, a young woman found herself in a brutally abusive relationship. With seemingly nowhere to go, and no one to turn to, she reached out to Suna. Her situation was all the more urgent because she was about to give birth to the child of her abuser. Suna knew that it would not be enough to just help the woman get out of the dangerous living situation… further support would be needed so the new mother could rebuild her confidence, improve her education, and secure a decent job to sustain herself and nurture her child. It was Suna’s hope that the young woman not simply survive the domestic abuse, but also be able to stand on her own, financially independent and forever free from the yoke of an abusive partner.

It was in that moment that the vision and inspiration for the Forsythia Foundation was born. Although the situation of that young mother was in fact frightening and desperate, it was unfortunately all too common. Violence against women is a scenario repeated all across the nation and the world, and the time to confront it and reject it, is NOW.

That is the mission and hope of Suna Om and the Forsythia Foundation. To stand up and push back against those that abuse women; to let single mothers know that they are NOT alone; to support them in their time of need and give them the tools to survive and prosper. In that way, just like the forsythia plant, whose branches reach out to touch the earth and take root again, so too the rejuvenated and independent mothers can again take root, grow, and reach out to help others overcome.

Show your support for women who are victims of domestic abuse.